If, by now, you got the big picture and right mindset, it is time to gather the right team. It would be nice to write here that it is all ok and easy — nothing to worry about — but that would not be true. There is a lot to worry about, a lot of things can go wrong, and it is far from easy. Honestly, it can be a nightmare. Engineers are trained to work with machines and technologies and that works just fine. But now it is about people and that requires an entirely different set of skills. Not much of it is measurable, not much of it is tangible, and almost nothing is predictable. It is about people, their emotions, motivation, personal interests, personal life .. and, let us be honest, engineers are rarely trained to deal with that. Mistakes done at this stage can ruin even the best strategies and plans in no time. The frustration may drive you to the point of giving up. It happened, it is happening, and it will happen in future.

Let us move outside our industrial environment for a moment. Imagine you are planning a trip with a small sailboat somewhere in the beautiful Adriatic see. You have room for a team of five or six people to join this adventure. At least twenty of your friends know how to sail — at least they are familiar with the basics — and if they are not so confident, you can easily teach them. How do you whittle down your team from twenty to five? What matters? Sailing skills only? I don’t think so. Let me mention what might matter to me.​

Mentality is very important. Do I want complainers or easy-going people? Being a team player is very important. Desire to take that trip matters a lot. Is there a passion? Getting along with other team members also seems to be important. Let us go further, troubled personal life? Picky about food? Cannot handle a beer or two well? Snores? Personal hygiene issues? Are they lazy?

You see how deep in details we go when choosing our friends to join our journey? Technical sailing skills are secondary. It is a journey after all, and you will spend a lot of time together.

Your lubrication journey is not much different; maybe slightly more complex. Instead of a group of friends having fun because they choose to, you have a group of people doing their job eight hours a day, apart from what they do for fun in their private time.

Here is another scenario to consider. Imagine you are rowing an eight-seater; like Oxford and Cambridge compete since 1829 (on annual basis since 1856). Strength and stamina are hugely important, of course, but how do you actually choose the team? What matters? Strength and stamina only? Again, I don’t think so. Imagine the amount of time they will spend together and everything they must do to prepare, and eventually win that race.​

Observe the depths we must go to when assembling a team. It seems that strength and stamina are secondary to likeability and compatibility. They say, that if you must choose between a guy who will row out of pace with the team and one that just does nothing, the latter is better.

If seven are rowing and one just sits still, you are at 87,5% of expected power. If eight out of eight are rowing, but one of them out of pace, your efficiency could drop to 75% or less (not mathematically correct but my point is illustrated). Choosing between two bad possibilities, it is better to have weaker, aligned teammate than stronger, misaligned teammates. These two examples illustrate how it affects you in small, silent steps … or in one short sprint. Both scenarios result in destructive outcomes.

So, let us make sure we don’t need to choose between two bad options. Aim for 100% and set your team well.

See, it is complex, and it requires your full attention and all your leadership skills to do it right. Right for your organization, right for you and right for all your team members. 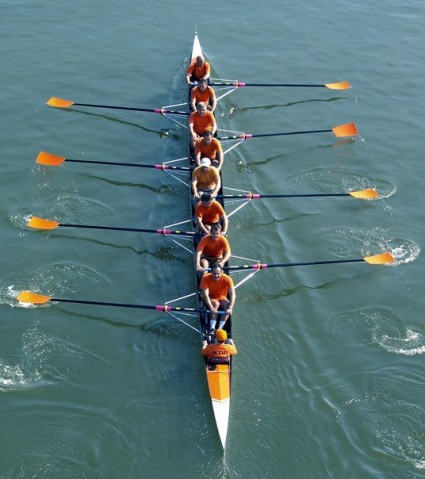 This is easier said than done as many people do not really understand the concept of leadership as opposed to being a boss. As a boss, you give commands to your subordinates and they are expected to execute them. This might work if you are an absolute genius who has absolutely everything under control. But, if you are able to do all that by yourself, why do you need a team in the first place?

As a boss, you own someone’s time, 8 hours a day and, normally, that is all you get. Leaders get much more; culture, involvement, ownership, initiative … leaders get the whole package. As a leader, you serve others to become better. You improve your most valuable assets – people, and improvement of the entire system happens much faster. In addition to serving others, you take full responsibility for their actions. It is not easy, but it is rewarding.

This is certainly not a lesson about leadership, but some of the tips could be handy. Forget about using authority, use passion. One of the most important members of your team is probably your boss, a person in top management that supports your program. Quite difficult to be bossy to your boss, right? Transfer your passion and your beliefs, explain and train, listen and show respect, motivate, do not micromanage, translate goals to each team member in language they accept. Values, beliefs, behavior, and rituals – culture. That is your first task to create within your team. The benefits of technology will grow just fine in that fertile soil.

These are not English words. They are invented to better illustrate what I often see. People get assigned to certain tasks Their superior sends them to join the team. So .. they MUST. You can easily recognize a MUST-er, that is the guy playing solitaire on his smartphone during the training. You are wasting each other’s time. And it is not his fault. It is probably your fault of the fault of the person that sent him. MUST-ers were not born that way, the system creates them. Bosses do this by forcing people to do something they do not understand or have no interest in. They will never do the job right. You don’t want MUST-ers in your team because sooner or later, they win .. and you lose.

Try the other way around. Promote your program, promote the idea, talk about it, share knowledge, share your plans. You need to hear yourself to be sure you understand it. And listen. Recognize those who react to your passion with their own passion. And there you will find your teammate.

MUST-er, in a best case scenario, becomes a DO-er.

Once you recruit your team from the fans group, the job is not over. Two other groups, Fence sitters and Naysayers, are there with you, as part of your organization, doing their job.

There are ingredients you need for your program;

You need both, keep that in mind.​

People often get tempted to do something about Fence sitters, to «convert» Fence sitters and to fight against Naysayers. Don’t do that.

Fence sitters are those guys that will just stand aside and observe. They will never convert. Their plan is to stay safe. They have an opinion but choose to be silent and avoid risk. Cowards? Maybe, but that is irrelevant. Given the choice of reaping a potential benefit, versus taking a risk and maybe reaping no benefit, they will always choose the safest, risk-free path. You can explain all you want, but they will not change. Because it is not about understanding, it is about their mentality. Their plan is simple and effective; if you succeed, they will hug you and say; «I believed in you from the beginning my friend» .. if you fail they will say; «I told you so!!»

Ignore them, don’t waste your time and energy.

Naysayers are those guys that openly oppose your ideas and your program. They say it loud and clear and offer their reasons why. Are they enemies? No! They have an opinion and they have the courage to express it. You need to respect that. If you fight against them, you recognize them as enemies, but there is a better way. Learn from them! Having a strong opponent is a blessing. Their position and the fact that they are saying it loud and clear is exactly what you need to understand the situation completely.

Listen to reasons why not, that tells you what others don’t understand. One of the ingredients, remember? Keep them close, keep listening to them, they are highly valuable opponents, not enemies. Not to be ignored or argued with, they might be right, they might even teach YOU something

They will make you better.

4. Me working in YOUR project vs. MY small private project

Translate goals to organizational, departmental, and individual. Those languages are different, so translate carefully!
Slice your strategy in elements, down to the individual level

Now, with clearly translated goals and sliced up strategic tasks .. create a private microproject and assign one to each team member. Make it personal: credits, responsibility, rights and obligations. Avoid feeling that they are working for your project as people are better when doing their own project, so define it clearly. By doing this, you create leaders, and that is your value as a leader.

Seems that you are surrounded with friends that think like you, carefully listening to colleagues that don’t think like you, ignoring those that have no courage to express their opinion. That is a good place to be.

Your team is a group of leaders, running their own micro projects with pride, taking credit for success, and taking responsibility for fails. Not blaming – helping, not grandstanding – sharing.

If you are in this position, you are already successful, you created a family.

I personally work in one.

It’s time to put the technology to work