What led to this condition?

Everything is fine? That shouldn’t make us invisible

18 pumps under the responsibility of a Condition Monitoring team, demonstrating an almost identical behavior, with identical symptoms… and surely calling for full attention. A user (meaning a friend, a member of the SDT family) asked me to assist. I was happy to join the party. Firstly, I looked at all the Ultrasound data one by one, and all of them looked quite similar to the one shown on the right.

Although it seemed that the party was over, the best part was yet to come; some Root Cause Analysis resulting with a report about the whole thing, root causes of that condition and maybe some recommendations. “If it wasn’t in a newspaper, it never happened”.

One might think that there was no reason to do an RCA, and that there was nothing to report, because everything is fine. Well, we thought that we had a perfectly good reason for RCA and a proper report.

Because everything is fine

Just a summary of the issued report: 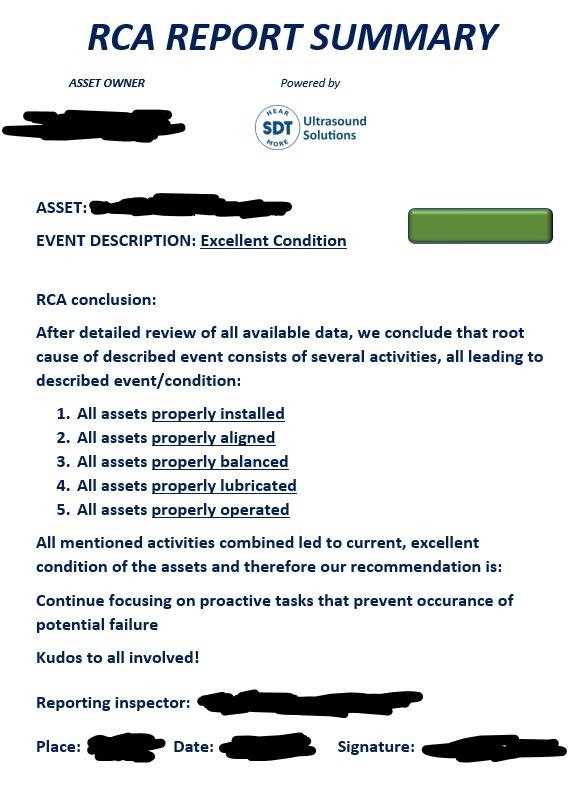 As you can see, there is a lot to report. That excellent condition did not happen all by itself. There were decisions, investments, training, people … and lots of knowledge and care involved to come to the point where we found no issues in the collected data.

Let’s look at ALL heroes, not just some of them

Most of the posts I see describe the finding of a defect, a potential failure. That is, of course, good. It justifies the use of technology, it proves the competence of the expert using it and it proves that Condition Monitoring is a lifesaving approach, so to speak.

But, finding a defect, even in the earliest stages, is never good news.

It is surely better than waiting for an asset to start sending smoke signals and fail, but in its essence; it is not good news.

Nobody celebrates when a medical diagnostician finds a problem, even in the early stages. It proves that he uses proper technology in a proper way, it proves that he is a good expert. But that is not good news.

Look at how it developed over the years, moving from full reactive behavior to predictive. Years ago, companies were celebrating people coming in at 3 am to repair failed assets, purely reactive. Those people had a complete exclusivity on heroism. That was wrong, of course.

Then, we learned a lesson, and started celebrating those who detect problems much earlier, Condition Monitoring. It didn’t go smoothly, there was a lot of effort invested in writing a report about success, because it is not an easy task. Writing about something that would cost X $ if not addressed in time. Practically, reporting an absence of a huge problem by showing a presence of small one. Showing an egg that would become a dragon.

People easily notice the presence of a bad event, but fail to notice the absence of one

Condition Monitoring is much more than just detecting anomalies. We should not forget that an important (and surely desirable) part of the job is to confirm good condition. And that should be the most satisfying part of the job; issuing a report saying that you can confirm all the assets are working fine. That doesn’t mean that your technology doesn’t work well. That doesn’t mean that you are not good at it. It just means that your work improved the Reliability to the level where you do not have so much detected problems to show. But you should show the absence of them.

Make a success root cause analysis and report it.

Then … share the glory with those who made it possible.

Those whose job is to make sure you have nothing to detect.

The lubrication community is one of them.

… and explaining why that is so.