Maintaining plant assets in an optimal state of lubrication is a topic receiving lots of attention. Maintenance and Reliability practitioners dedicate teams to the task but not every organization achieves world-class results. As much as 80% of all bearing failures are attributed to poor lubrication practices including:

One glaring mistake that contributes to early bearing failure is over/under lubrication. Over and under lubrication is the product of scheduling grease replenishment based on time rather than conditions, and not knowing how much grease to inject.

Too often bearings are being fed new grease before its required. Other times the grease gun comes out too late. Some lubrication technicians guess at the quantity of grease to inject and don’t even know how much grease is dispensed with a stroke of their grease gun. Bearing manufacturers provide formulae for calculating a theoretical grease capacity for each bearing but not everyone knows how to use them. Still others simply follow guidelines given by the motor manufacturer. Often this “bad advice” is stamped directly on the motor.

To drive home this point, Haris Trobradovic, one of SDT’s many globe-trotting corporate trainers recently delivered training to a petrochemical facility in the Middle East. 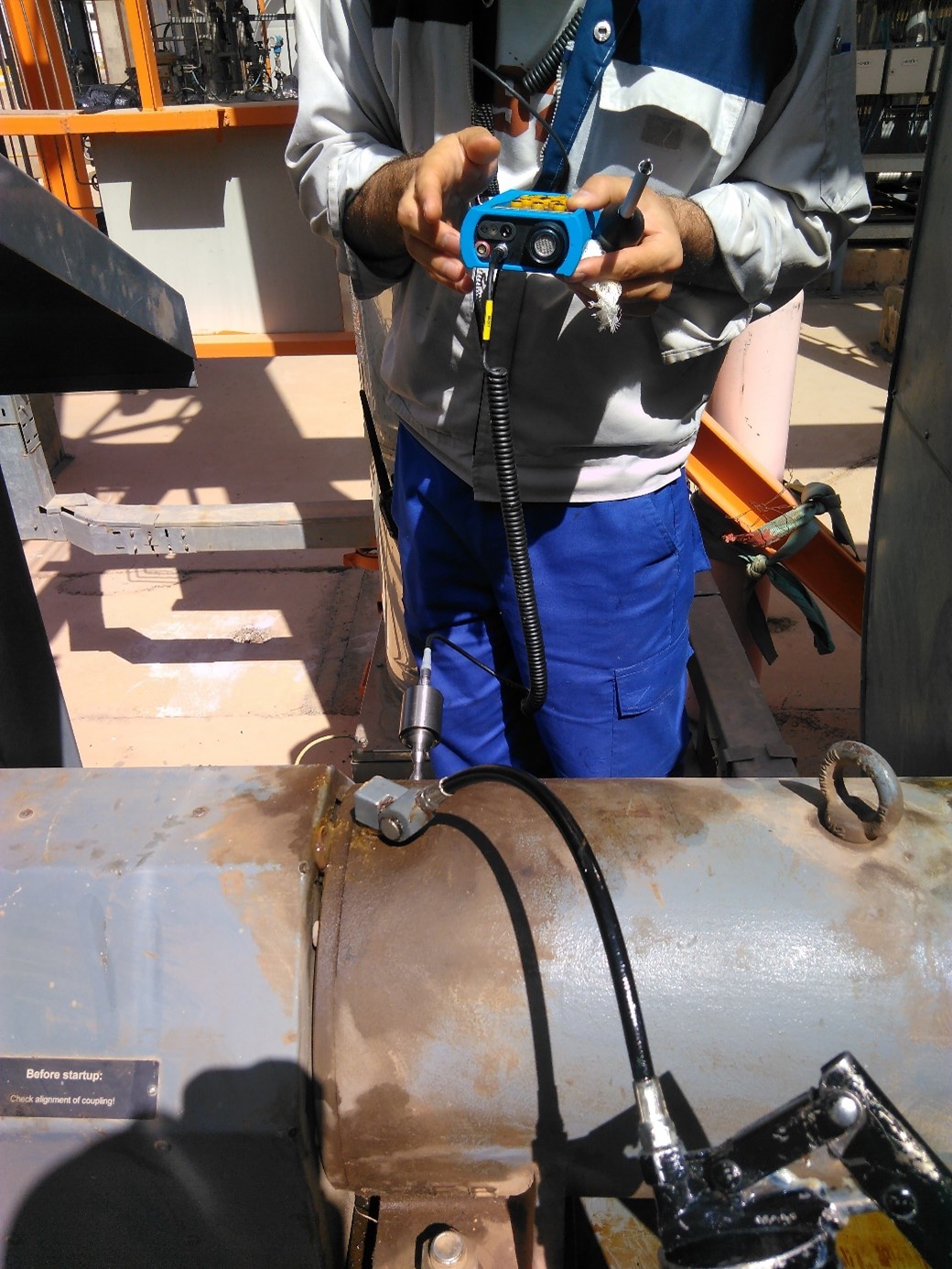 “During the training, we performed measurement practice on several machines (Figure 1). One of the machines was a fan, scheduled for re-lubrication in a few days.” recalls Haris. “The customer’s standard greasing practice is to follow manufacturer’s recommendations for both interval and amount. In other words, they grease on a time-based schedule and trust the motor manufacturer to guide on quantity.”

Following the facility’s lubrication procedure raised several red flags. Figure 2 shows two bearings driving the fan. Why would two identical bearings, but with different loads, have the exact same grease replenishment protocols? Maybe it’s purely out of convenience. Since the lube technician is there to grease the drive end bearing, might just as well pump a few strokes into the non-drive end.

Figure 2 - Two fan bearings with different load. Why do they share the same grease replenishment protocol? 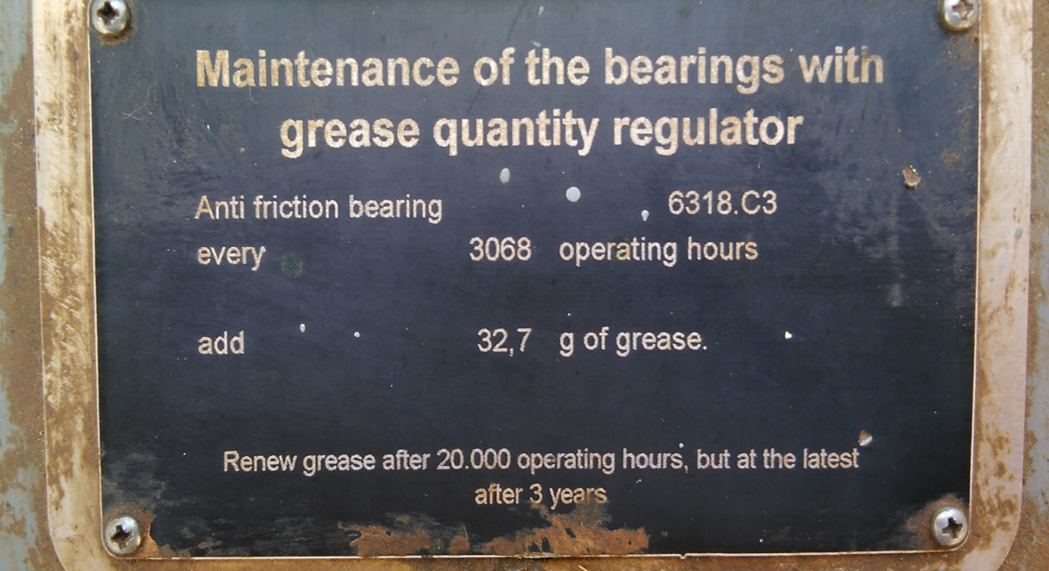 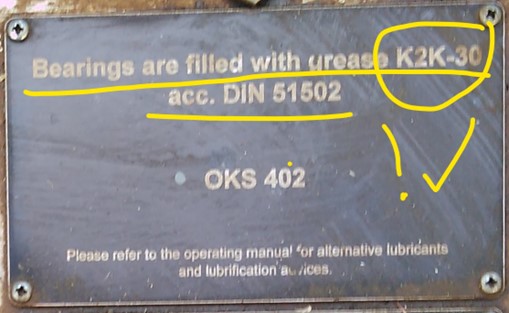 Another issue that disturbed the SDT trainer was the instructions stamped on the motor plate. See Figure 3 – “Maintenance of the bearings with grease quantity regulator”. This stamp instructs the owner of the motor to add 32.7 grams of grease (grease type not identified) every 3,068 operating hours. Haris wondered if the OEM took into consideration the installation of the motor in a climate that is very hot and humid in the summer time, but cold, snowy, and dry in the winter.

One refreshing fact was an additional plate (Figure 4) with details about the grease type used in the bearing. Mixing incompatible grease types is an often-cited cause of premature bearing failure. This same reminder is provided by the SDT LUBExpert. Prior to beginning a lubrication task, LUBExpert reminds the operator of the correct grease type to use.

Continuing with the experiment, Haris and the Condition Monitoring team attached the grease gun to the SDT equipment and greased the drive end bearing following OEM recommendations. Figure 5 is a screenshot captured from UAS3, the companion software to LUBExpert. The top trend is the drive end bearing. Within four minutes the overall RMS increased by 7 dBµV while the Crest Factor and Peak spiked sharply. 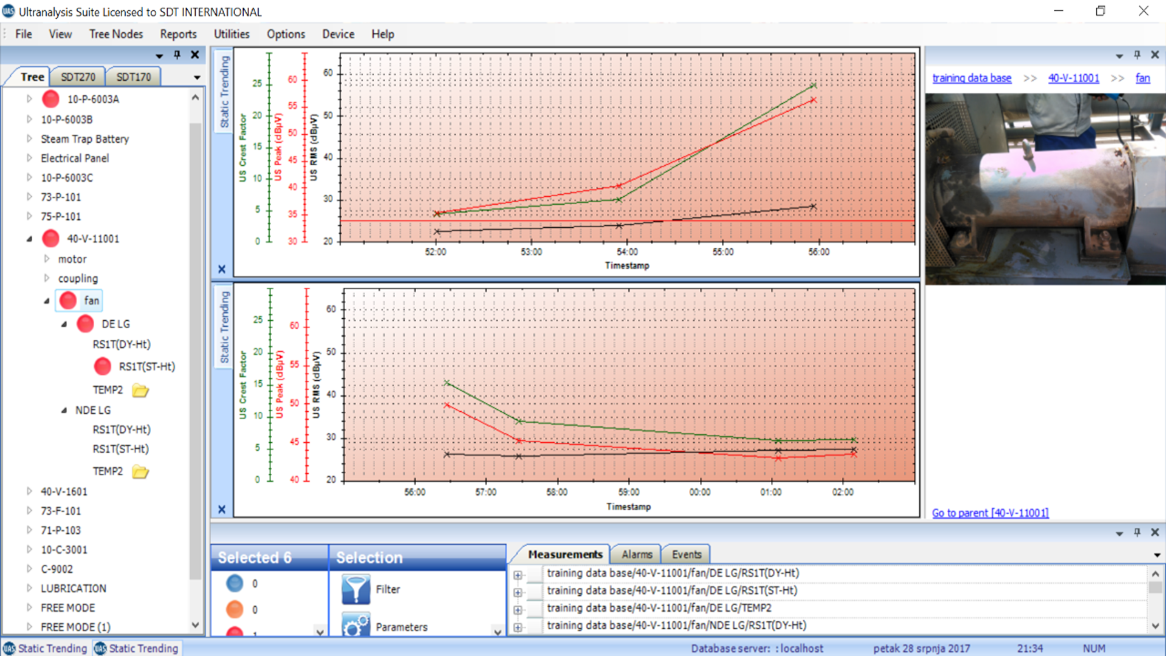 The bottom trend is from the non-drive end bearing. Adding the requisite amount of grease had no positive outcome for the Overall RMS which stayed stable at 26 dBµV. The drop in Crest Factor and Peak readings, however, indicates the bearing may be entering a failed state. More frequent condition monitoring with complimentary technologies such as vibration analysis will ensure any machine downtime is scheduled on the client’s terms, not the machine’s.

For those unfamiliar with these data formats, Overall RMS, Max RMS, Peak, and Crest Factor are unique condition indicators developed by SDT to bring analytical meaning to ultrasound STATIC data. Sadly, following OEM procedure resulted in over lubrication of the drive end bearing.

To drive home the point, Haris also captured DYNAMIC time signals from the drive end bearing. As seen in Figure 6, the time signal before (bottom) and after (top) reveals new peaks and impacts forming. Over lubrication causes pressure to build inside the bearing. Ideally, the oil wants to feed from the thickener to form a thin film between the rolling elements and the race. It can’t do this if there’s too much grease and pressure. The result is increased friction and impacting, two phenomena easily detected with ultrasound specialty tools like SDT’s LUBExpert. 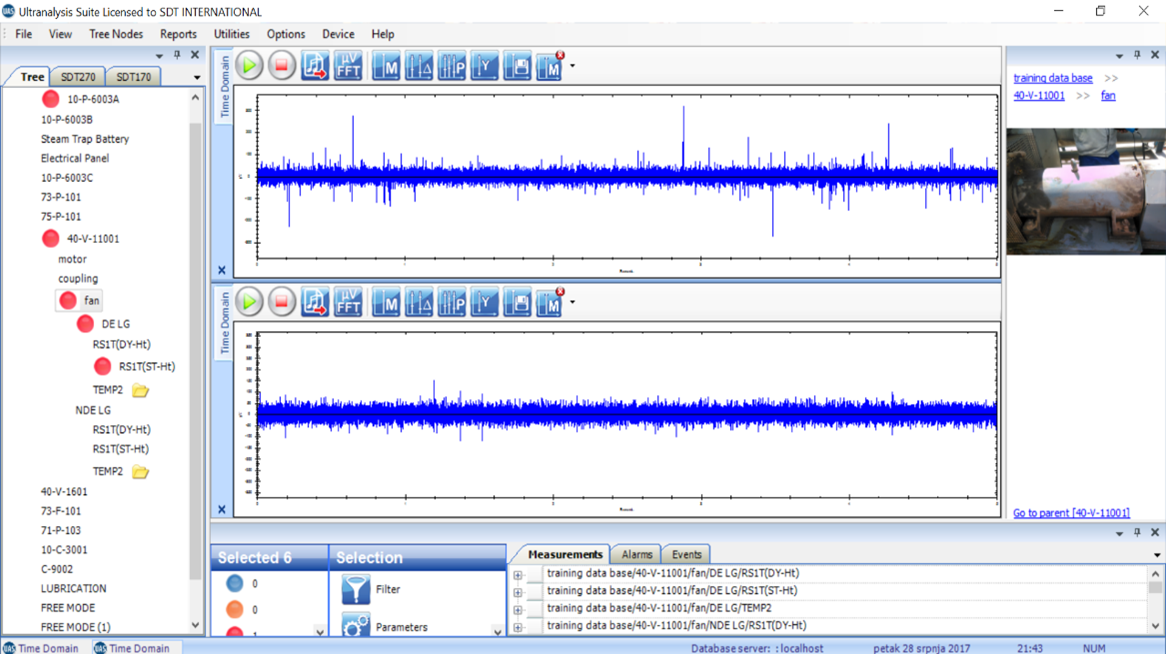 Finally, Haris collected DYNAMIC time signals on the non-drive end bearing. In Figure 7, the bottom time signal shows dominant peaks that are clearly non-sinusoidal and indicative of impacting. After lubrication those peaks are gone. It appears that replenishing the grease in the non-drive end had some positive benefits, and those benefits are clearly illustrated in UAS3 time view. 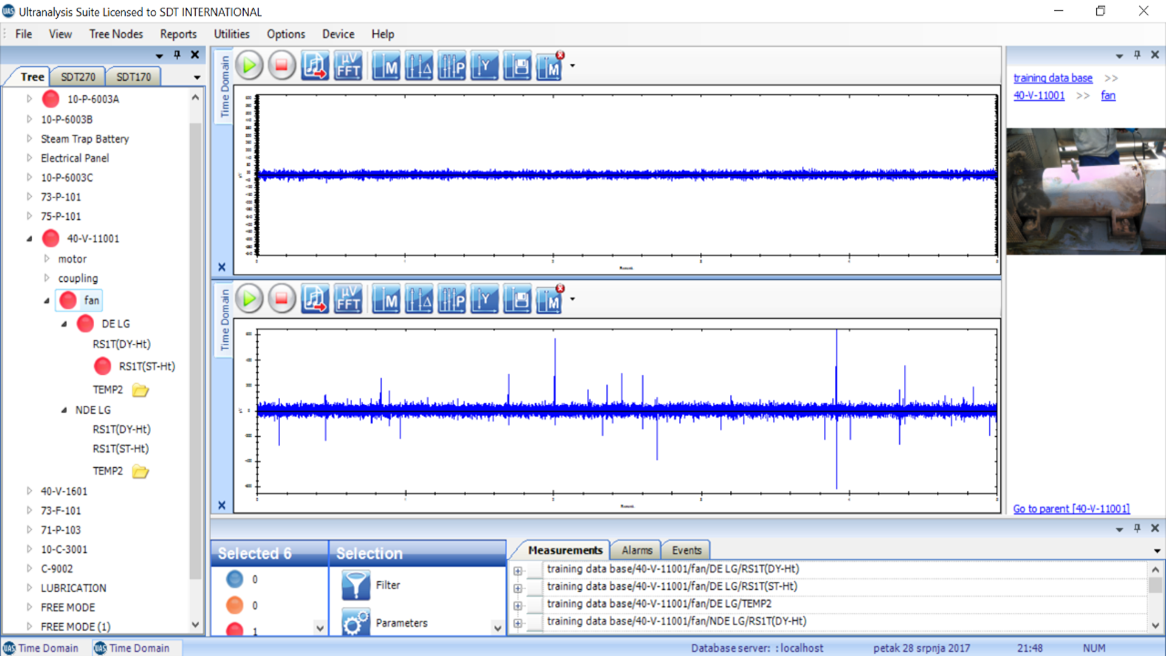 Figure 7 - The non-drive end bearing has defects as shown by this dynamic time signal. Ultrasound assisted lubrication with SDT allowed the CM team to identify this potential fault.

The bottom line is that following OEM recommendations to replenish lubrication on a time-based or time-in-service protocol are proven wrong time and again. Following the greasing instructions stamped on the motor plate led to the drive end bearing being over greased and reducing life expectancy.

Another interesting takeaway here is that while an ultrasound lubrication solution – LUBExpert – was used to monitor the effects of adding grease, the added benefit for the CM team is the indication that a failure state may exist. There was a day not too long ago when the lube technician was counted on for keeping his finger on the pulse of the plant. Solutions like SDT’s LUBExpert are restoring important responsibilities to a task that recently has been given to “lower-skilled” tradespeople.

It’s past time that lube-techs be recognized for the important role they can play contributing to plant reliability.