A failed trap generates a huge waste of energy and steam. It can also cause severe damage to the system and a drop in production quality. And yet, steam trap control is often neglected in maintenance programs. A curious paradox…

Today, maintenance and production managers are faced with a real challenge. In fact, the objectives for increasing competitiveness often seem contradictory: on the one hand, to reduce energy costs, reduce investments in maintenance and provide better service with reduced teams, but on the other hand, to ensure optimal operation of the tool to produce more, better and cheaper.

Malfunctions and breakdowns caused by faulty traps can have serious consequences for production and logistics. Consequences that competitive objectives no longer allow!

A predictive maintenance program for production facilities is, therefore, a decisive and strategic priority. And when it comes to costs, the figures speak for themselves. Steam is an expensive energy fluid, about 25 €/T. Repairing a single leaking thermodynamic steam trap saves at least €2 500 per year, and repairing the smallest float steam trap (discharge orifice = Ø3.2 mm) that is stuck open: €5 000/year at 6 bar and €7 400/year at 10 bar. Without periodic inspections, it is generally considered that 20 to 30% are faulty. Given the high cost of steam production, a steam trap monitoring program will result in significant energy savings.

As steam traps operate, they produce ultrasound. You can clearly hear the trap’s on-off cycle: either the trap is closed and the signal is weak, or the trap opens and the signal is strong, only to become weak again when it closes. When a relatively constant signal is detected, the temperature measurement is useful for quickly detecting whether the trap is failing closed or failing open. Also, once you have determined the cycle time of a specific steam trap, you can hear if it is closed or open. A constant noise without intermittence will be the result of an open trap, while when it makes no noise, it means it is closed.

A trap is an automatic valve that opens to remove air and condensate from the steam system and closes immediately to conserve as much live steam as possible. Monitoring its proper operation is therefore a priority. When a trap fails in the closed position, condensate accumulates upstream.

The consequence is a drastic decrease in the energy performance of the installation, which affects the quality of production and the proper functioning of the process. An accumulation of condensate will also be responsible for water hammer, which is particularly destructive for the installation.

When a trap fails in the open position, it is responsible for a considerable loss of energy through wasted steam.

A quality ultrasonic detector with built-in pyrometer with laser sighting and multiple sensors (RS Needle Contact Sensor as below or RS Threaded Sensor) makes monitoring all types of traps fast, easy and efficient. And if you want more, there’s always the option of using Ultranalysis® 3 software, which allows you to make a diagnosis by comparing the time signal from two identical steam traps to evaluate if both work or not. 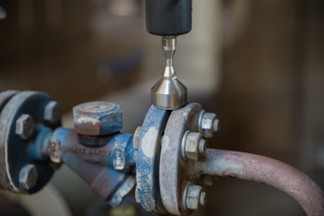 Combined with other actions, a few good predictive maintenance approaches for our production tools are sure to help us maintain or even improve our competitiveness, and without heavy investments.