Bearings are widely used in industrial applications and considered as crucial component.

Bearing failures, when not detected in time, are responsible for unscheduled shutdowns and, therefore, expensive downtime. They may even lead to catastrophic breakdowns. 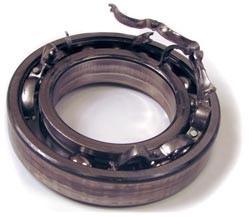 Low-speed bearing monitoring is a different story. These “normal” technologies are most of time blind until it is too late, when speaking about less than 250 rpm. So, in this slow speed application, early bearing failure remains a notorious problem… for those who do not use ultrasound.

For mechanical inspection, ultrasound detects and measures the acoustic waves generated by impacting in bearings and friction or rubbing from poor lubrication. Based on sound, the technology is called Ultrasound because it uses high frequencies, above the 20 kHz high frequency limit of human hearing.

The answer lies in two key elements: high frequencies and shocks, which are the foundations of ultrasound. The two properties are particularly useful for low-speed machinery for which, by definition, signals coming from bearings are typically weak.

First, high frequencies are sensitive to impact. Further, the ultrasound range is naturally unresponsive to low frequency phenomena such as the machine’s running speed, which will tend to mask bearing failure in vibration.

Second, ultrasound detects the shock waves generated by bearing failure, more precisely, the localized energy released by impact. In case of low speed, these impacts are too weak to cause much structural vibration.

Combining these two advantages, ultrasound is a selective method, highlighting impacts and friction from the background noise produced by low frequency phenomena. The user benefits are:

Still, effective and optimized sensors and instruments should be chosen!